The worm is aptly named, both its common and Latin names refer to the two chromatically hued spiral structures, the most common feature seen by divers. The multicolored spirals are highly derived structures for feeding and respiration.

Spirobranchus giganteus is similar to most tube-building polychaetes. It has a tubular, segmented body lined with chaeta, small appendages that aid the worm's mobility. Because it does not move outside its tube, this worm does not have any specialized appendages for movement or swimming.

The worms' most distinct features are two "crowns" shaped like Christmas trees. These are highly modified prostomial palps, which are specialized mouth appendages. Each spiral is composed of feather-like tentacles called radioles, which are heavily ciliated and cause any prey trapped in them to be transported to the worm's mouth. While they are primarily feeding structures, S. giganteus also uses its radioles for respiration; hence, the structures commonly are called "gills."

Christmas tree worms are widely distributed throughout the world's tropical oceans. They have been known to occur from the Caribbean to the Indo-Pacific.

As sedentary inhabitants of coral reefs, Christmas tree worms feed primarily by filter feeding. They use their brightly colored radioles to filter microorganisms from the water, which are then deposited straight into the worm's digestive tract. 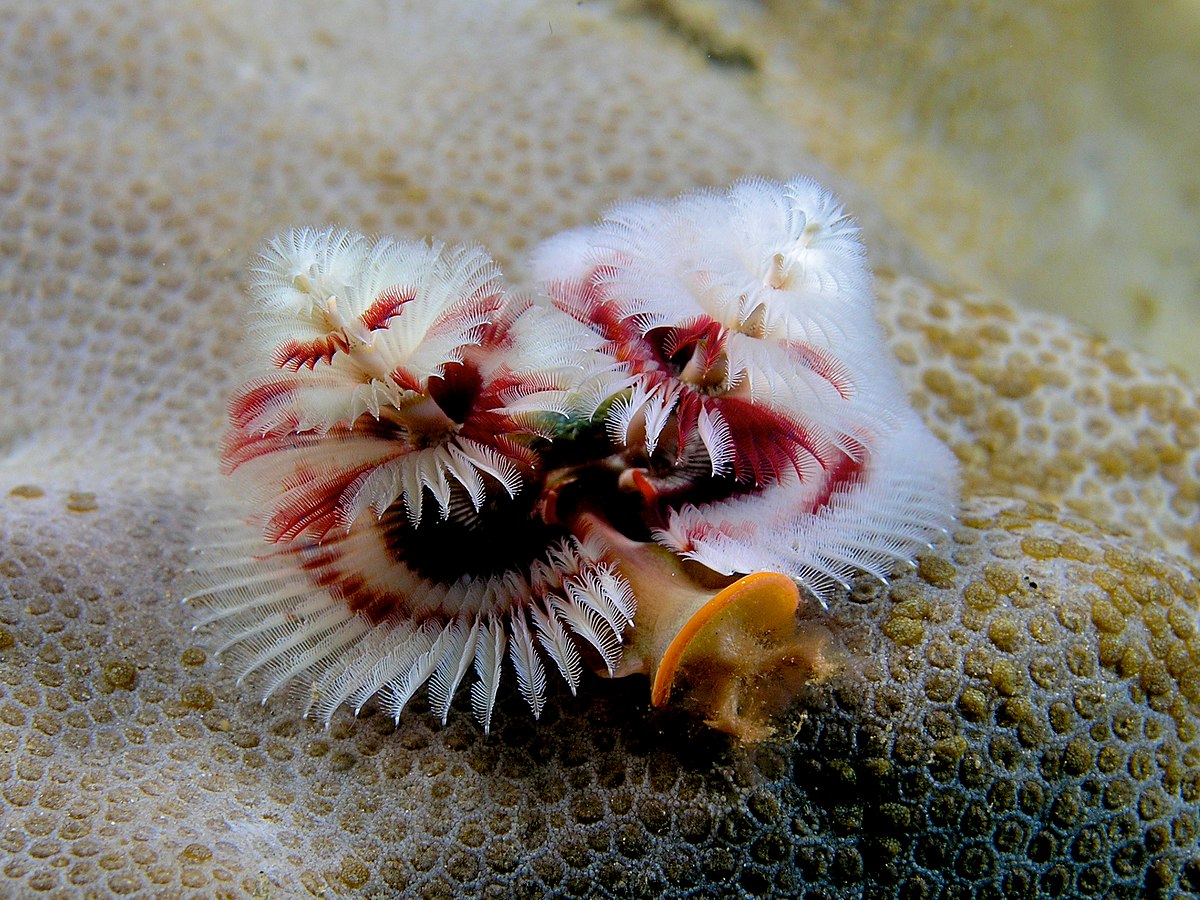 Spirobranchus giganteus is commonly found embedded in entire heads of massive corals, such as stony corals like Porites and brain corals. Like members of its family, it can secrete a calcareous tube around its body. This tube serves as the worm's home and protection. S. giganteus usually bores a hole into an existing head of living coral before secreting its tube, thereby increasing its level of protection.

They come in many colors including orange, yellow, blue, and white and, though they are small with an average 3.8 cm in span, they are easily spotted due to their shape, beauty, and color.

The colorful plumes, or tentacles, are used for passive feeding on suspended food particles and plankton in the water. The plumes are also used for respiration. Though the plumes are visible, most of these worms are anchored in their burrows that they bore into live calcareous coral.

Christmas tree worms are very sensitive to disturbances and will rapidly retract into their burrows at the slightest touch or passing shadow. They typically re-emerge a minute later, very slowly, to test the water before fully extending their plumes.