Sultan the Pit Pony is a massive 200 metre raised-earth sculpture in Caerphilly, in South Wales. The sculpture is affectionately named “Sultan” after a well-loved pit pony that worked in the local mines hauling tubs of coal. The sculpture itself is built out of coal shale from those mines, as a reminder of an industrial past that changed Britain, and the world, forever. Coal was the fuel of the Industrial Revolution that put Britain at the forefront for over 100 years in the 19th and early 20th centuries. Coal provided the necessary power source for steam engines which became one of Britain’s most significant contributions to human history.

Ponies, horses and mules were commonly used in underground coal mines in North America and Europe, from the mid-18th until the mid-20th century. Previously, children and women were employed to lug or drag coal out of the mines. As the mines became deeper and distances became greater, they were replaced with “pit ponies”.

Pit ponies were the most regulated horses in the entire British Isles, being over seen by the National Coal Board and subject to many rules and requirements. Typically, they would work an eight-hour shift each day, during which they might haul 30 tons of coal in tubs on the underground narrow gauge railway. As the ponies got older, their daily shift might be cut back to a mere 4 hours of work. The ponies stayed almost entirely underground where they were fed on a diet with a high proportion of chopped hay and maize, coming to the surface only during the colliery's annual holiday. Since pit ponies belonged to the mining companies, they were highly valued capital, who were generally far better looked after by the company management than the coal miners were. 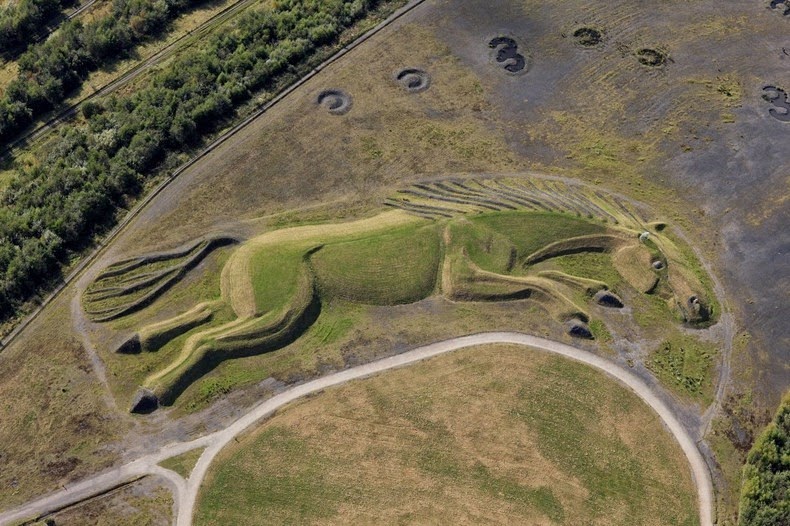 Carved from a former coal tip, Penallta offers the visitor spectacular views across the county borough from the high point observatory.

You won’t be able to miss ‘Sultan’ the pit pony, the UK’s largest figurative earth sculpture.