Bringing some of the mysteries of the universe a little closer to home.
Post Reply
First unread post • 3 posts • Page 1 of 1

After several months of downtime since Hurricane Maria struck the island of Puerto Rico, the Arecibo Observatory Planetary Radar has returned to normal operation, providing the highest-resolution images to date of near-Earth asteroid 3200 Phaethon during its December 2017 close approach to Earth. The radar images, which are subtle at the available resolution, reveal the asteroid is spheroidal (roughly ball-shaped) and has a large concavity, or depression, at least several hundred meters in extent near its equator, and a conspicuous dark, circular feature near one of the poles. Arecibo’s radar images of Phaethon have resolutions as fine as about 250 feet (75 meters) per pixel.

“These new observations of Phaethon show it may be similar in shape to asteroid Bennu, the target of NASA's OSIRIS-REx spacecraft, but more than 1,000 Bennus could fit inside of Phaethon,” said Patrick Taylor, a Universities Space Research Association (USRA), Columbia, Maryland, scientist and group leader for Planetary Radar at Arecibo Observatory. “The dark feature could be a crater or some other topographic depression that did not reflect the radar beam back to Earth.”

Radar images obtained by Arecibo indicate Phaethon has a diameter of about 3.6 miles (6 kilometers) -- roughly 0.6 miles (1 kilometer) larger than previous estimates. Phaethon is the second largest near-Earth asteroid classified as "Potentially Hazardous." Near-Earth objects are classified as potentially hazardous asteroids (PHAs), based on their size and how closely they can approach Earth’s orbit. 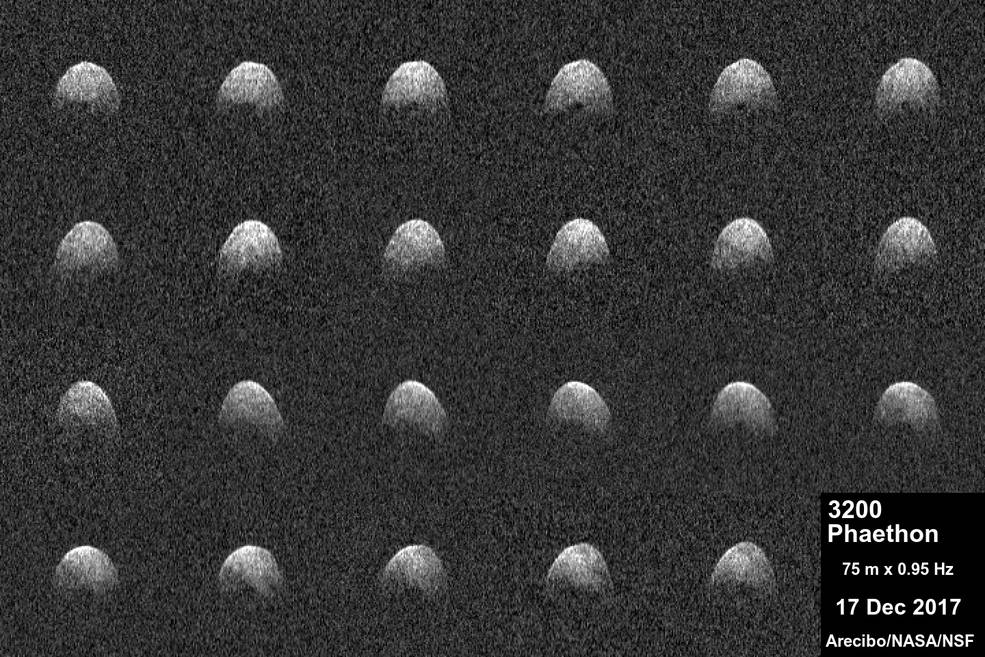 These radar images of near-Earth asteroid 3200 Phaethon were generated by astronomers at the National Science Foundation’s Arecibo Observatory on Dec. 17, 2017. Observations of Phaethon were conducted at Arecibo from Dec.15 through 19, 2017. At time of closest approach on Dec. 16 at 3 p.m. PST (3 p.m. EST, 11 p.m. UTC) the asteroid was about 1.1 million miles (1.8 million kilometers) away, or about 4.6 times the distance from Earth to the moon. The encounter is the closest the object will come to Earth until 2093.

The encounter is the closest the object will come to Earth until 2093.